On a recent “real” camping adventure at Abbotstone Wood in Hampshire we were able to have an open campfire. This was great fun to build and meant only one thing was on our menu come tea time. S’mores!

S’Mores are a deliciously gooey North American favourite made with a combination of fire roasted marshmallow, chocolate and graham crackers squished together to make a sandwich with a difference. The dish is so popular in America that they even have a national S’mores day on the 10th of August each year and the name itself is derived from Some More showing just how popular and tasty they are. But can you make S’mores in Britain? With a few twists on the ingredients yes you can.

Alternatively, if you simply must make S’mores the American way they take a look at one of these S’mores kits.

Step 1 to make S’mores: Know and buy your ingredients

The ingredients for S’Mores are pretty simple and the first two, Marshmallows and Chocolate, are really easy to get. We opted for a bag of large Marshmallows and Giant Cadbury Chocolate buttons (the best chocolate in the world). However, the third ingredient was something called a Graham Cracker. We wondered what on earth this was and doubted it would be on the shelves in Waitrose.

A graham cracker, pronounced “grahmm” cracker, is a biscuit made from unbleached white flour mixed with wheat bran and germ. Created in 1829 by Sylvester Graham, a Presbyterian minister in New Jersey, it was originally conceived as a health food (to help curb carnal appetite no less) and made unsweetened. But, over the year’s sugar and other sweeteners have been added and this is now firmly known as a biscuit. But do they sell graham crackers in the UK?

Yes, the prevalent brand in the UK seems to be Nabisco Graham Crackers available from Ocado, Tesco and Amazon. However, neither Ocado or Tesco had any and we couldn’t wait two days from Amazon. So we needed to find an alternative and turned to a British classic…the digestive biscuit. A bit thicker than a Graham Cracker but just as tasty and goes better with a cup of tea which is a must when camping.

So the ingredients required for British S’mores are:

This part is easy I thought. I was wrong. We quickly discovered it is very easy to get the process wrong and send your Marshmallow from perfect to burnt in seconds. You have to keep turning them over and watch carefully with the perfect time to take them out. This was when there was some colour and browning on the outside, similar to the colour of brown sugar. The inside would then be gooey and delicious. Don’t be tempted to let it catch fire as they burn quick and it will have a very bitter taste. Also be careful that it doesn’t fall off your stick. Once you have your perfectly cooked Marshmallow it’s time to bring the ingredients together and create a S’more.

Step 3 to make S’mores: Squish it all together and take a bite

This was everyone’s favourite part of making S’mores. Take a digestive and pull/spread the cooked marshmallow onto the biscuit. Take another biscuit and lay on as many Cadbury Buttons as you can. Now quish them together. Give it a moment for the heat of the marshmallow to melt the chocolate. Now take a big bite and enjoy S’mores the British way.

Overall making S’mores was great and messy fun. It is really suited to camping and something the whole family can have a go at. Just be careful around the fire.

If you want a traditional S’more

If you want to go for traditional American style S’mores instead then pick up one of these great and easy to use S’mores kits. 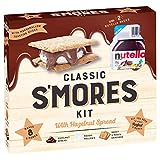 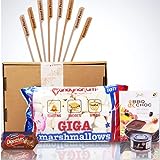 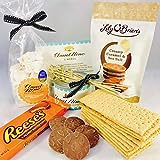 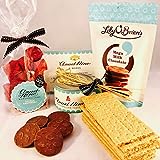 For more information on these kits check out our guide to S’mores kits in the UK.

You don’t need a open campfire to make S’mores

If your campsite doesn’t allow open fires, then try there alternatives to cook your S’mores.

Where to buy Graham Crackers in the UK

Before you embark on your next family camping trip be sure to check out some of our key camping guides.

This guide to making s’mores in the UK contains links to Amazon UK. If you click on a link and make a purchase we may receive a small commission. This commission goes towards the running of Travelbetter and helps keep us an independent travel website.